Spreading hope by sharing her experience 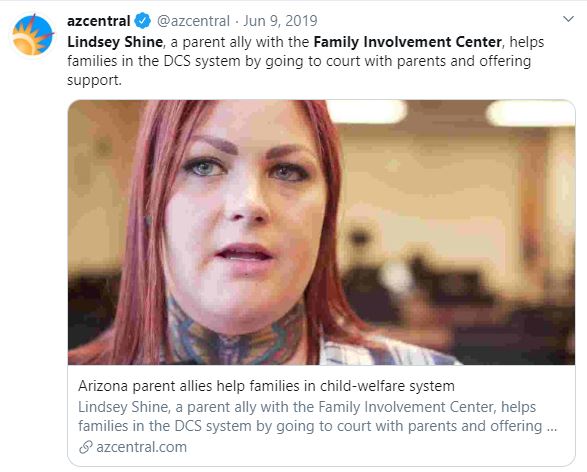 When Lindsey Shine found The Family Involvement Center, she was 25, pregnant, and the parent of two children in the custody of the Department of Child Safety (DCS), the state’s child welfare system.

The children were taken into care when they were all living with relatives. In order for them to remain with relatives, Lindsey was required to leave the family home, causing her to continue her long history of homelessness. She began living in a string of motels, on the street and in the company of people who were also struggling to survive and used drugs to cope.

In the beginning, Lindsey had little contact with anyone from DCS for many months. When she made contact with someone, that person was often replaced by someone else and Lindsey would have to start all over again. This cycle resulted in delays, and Lindsey struggled to engage in services.

Eventually, the case plan was changed to severance. Tired of living on the street and being subject to violence, Lindsey found housing for pregnant women with substance use disorders. While there, Lindsey was encouraged to engage in healing services. The professional help was much needed due to the many traumas Lindsey experienced during her life.

Lindsey then found the Family Involvement Center. She was assigned a peer parent, Shelby, who saw a person needing help. Shelby provided Lindsey with support and guidance in navigating the DCS case plan. During this time, Lindsey decided to give up her unborn child for adoption. Shelby provided Lindsey with much-needed support throughout the process.

“I soaked up the information I learned in the parenting classes and began to thrive in this environment,” Lindsey said.

She also engaged in Family Treatment Court, which provided her with support and guidance to address her substance use. As a result, the DCS case plan was changed back to reunification.

Unfortunately, shortly before her oldest children came home, tragedy struck when Lindsey’s long-time boyfriend passed away. Thanks to the supportive network she surrounded herself with, Lindsey says she was able to make it through his death, as well as the rebirth of her family being together once again.

After Lindsey completed family treatment court, the judge recommended Lindsey to a new program, also run by the Family Involvement Center, called Parents For Parents. This program provides peer support to parents who recently had their children removed. Parents are matched with a parent who was successful in their own DCS case.

Lindsey’s involvement began almost two years ago. She continues to provide peer support through the Parents For Parents Program to this day. In September alone, two parents Lindsey supported, whose case plans were severance, have been reunified with their children. Both credit Lindsey for providing support and walking alongside them through their journeys.

Today, Lindsey is active in her city, seeking changes through the Parent Advisory Board, the Prevention Advisory Collaborative, and the Family Navigation Action Team. She has made many presentations to the community, as well as to the governor’s office and even incoming dependency judges. Lindsey is proud to serve her community and contribute to the betterment of child welfare.

“I soaked up the information I learned in the parenting classes and began to thrive in this environment,” Lindsey said.