My passion is building strong dads 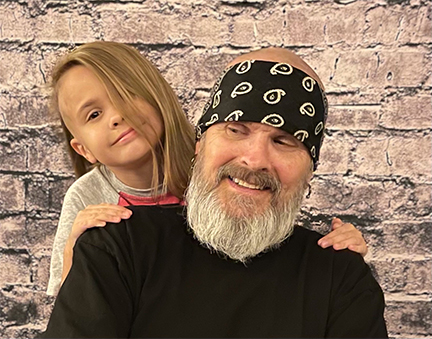 For FIC Parent Ally Sleepy Vildosola, being a dad has been central to his life’s journey —   as have addiction and abuse.

Born to hippy parents, Sleepy’s first few years were fairly normal and happy-go-lucky. He loved riding his Schwinn into the desert to explore. Sleepy’s dad also was what you might call happy-go-lucky.

However, after he and Sleepy’s mom divorced, he mostly traveled from state to state in search of parties to get high. When he would return to Arizona, Sleepy’s dad would take him and his sister to the parties.

“My dad was a heroin addict,” Sleepy recalled. “I remember helping him to pull the plunger on his syringe.”

At 34, Sleepy’s dad died when he ran off the road while driving under the influence. By that point, Sleepy’s mom had remarried a man who disciplined with his fists. One particular instance after a bad parent/teacher conference proved to be Sleepy’s breaking point.

“I remember the feeling like nothing, utterly defenseless, and that he was coming to kill me,” Sleepy said. “That [beating] changed me forever. It took my soul and set the tone for my whole life.”

By 7th grade, Sleepy was bringing his stepdad’s joints to school for his classmates and staying with his maternal grandparents. This is also when he began his journey with addiction and drug dealing – with meth and heroin as his drugs of choice.

Before turning 18, Sleepy had already experienced homelessness, lived with strangers, and spent time in juvie. He went to prison for the first time at 19, spending a total of 16 years incarcerated for drug-related offenses.

in 2012, Sleepy’s daughter, Ava, was born. Seeing her bassinet and her family around her, Sleepy had a moment of clarity. “I cried because I realized in a split second what a piece of garbage I was,” he said. “She was clean, untouched by this ugly-ass world. I didn’t want to touch her because I was filthy.”

Still, Ava’s mom pushed Sleepy to be a part of Ava’s life.

Sleepy went to the Salvation Army for help and graduated from the Adult Rehab program. Sleepy then realized he had to learn basic life skills, such as handling money responsibly, paying bills, and finding an apartment. In fact, at one point, he filed for emergency custody of Ava, but he didn’t even have a car.

“Lindsay took it upon herself, on her own time, to do everything she possibly could to help,” Sleepy said. “She 100% advocated for me.”

FIC staff Terri Holloway advised Sleepy to hire an attorney to protect his rights as a dad. Sleepy sold his tattoo shop to pay his lawyer and, ultimately, secured full physical and legal custody of Ava.

In February 2021, Sleepy got a call from a prior girlfriend asking for help with their son Mason. She was in trouble with DCS, who also reached out to Sleepy requesting a paternity test. Sleepy had a relationship with Mason, but knew his mom was manipulating him through Mason and his paternity was in question. Sleepy’s in the process of fighting for full custody of Mason because of his mom’s addiction and prior DCS cases.

After Sleepy got custody of Ava, Lindsay encouraged Sleepy to apply for a job as a Parent Ally with FIC. Although FIC wasn’t able to hire Sleepy immediately, he was eventually hired because of his experience as a dad.

“Dads don’t get equal status as parents,” Sleepy stressed. “You can’t stop me from being a dad. Dads need advocates to help them be better dads.”

Sleepy is excited to build more programs for dads at FIC because when he first took custody of Ava, there were no services for dads.

“I love FIC,” he said. “I get the flexibility and support I need as a single dad, and I’ve learned how to be a better dad. And the women I work with are powerhouses.”

* If you’re wondering how Sleepy got his name, he’s not sure. “I don’t know,” he said. “They just always called me Sleepy.”